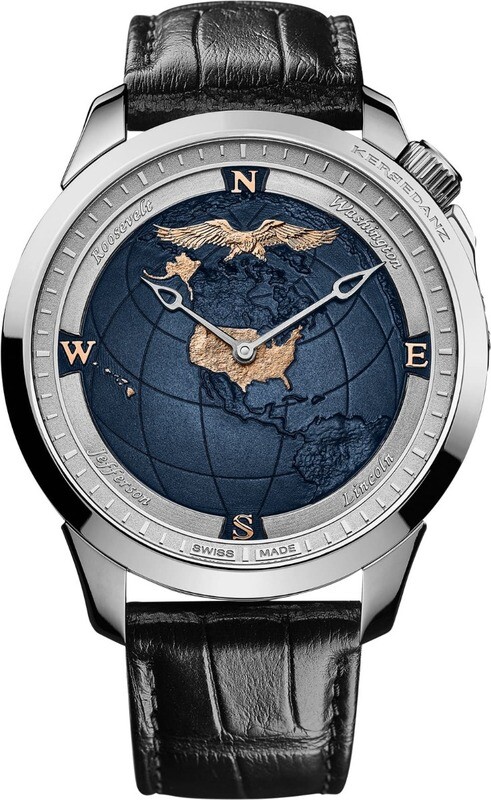 KERBEDANZ deeply admirative of the United States, its Constitution and its history decided to dedicate this model to the United States of America, as a tribute to the "Country of Free Enterprise".

The four 18-meter tall titanic sculptures of the Rushmore National Memorial, 1745 meters above sea level, have been carved directly into the granite cliff in the heart of the Black Hills in South Dakota.

They represent the portraits of the four most prestigious presidents in the history of the United States, George Washington, Thomas Jefferson, Theodore Roosevelt and Abraham Lincoln, made by the sculptor Gutzon Borglum between October the 4th 1927 and October 31st 1941.

George Washington (1732-1799). Chief of Staff of the Continental Army during the Independence War between 1775 and 1783, became the first President of the United States from 1789 to 1797. He was considered by the Americans as one of the Founding Fathers of the United States.

Thomas Jefferson (1743-1826) was the third president of the United States from 1801 to 1809. His political work is commented very positively by historians in general and especially for his important contribution to the "Declaration of Independence of United States -". Studies regularly rank him among the greatest presidents of American history.

Theodore Roosevelt (1858-1919). Twenty-Sixth President of the United States, from 1901 to 1909, he was also historian, naturalist, explorer, writer and soldier. His presidency will be marked notably by his mediation in the context of the Russian-Japanese war, mediation that will earn him the Nobel Peace Prize.

Abraham Lincoln (1809-1865). The sixteenth president of the United States, he was twice elected to the presidency in November 1860 and November 1864. During the Civil War, he succeeded in preserving the Union. It was during this period that he ratified the 13th Amendment of the United States Constitution for the Abolition of Slavery. Five days after the end of the war, he was assassinated following a conspiracy of the Confederates. Lincoln is considered by all Americans as one of the countrys greatest presidents

Each watch can be personalized with an engraving such as a name or a signature. We also intend to name each watch of the series after the name of each State, in the order of ratification of the Constitution.

Shipping for Orders on Exquisite Timepieces:
All orders over $1,000 within US are elegible for Free Shipping. Shipping for orders under $1,000 is $35.
International Shipping:

International orders are Shipped via FedEx, this orders may be subject to Customs Duties and Tax regulations specified by the designated country, and are the sole responsibility of the customer, the average International order takes up to 1 week for delivery. Oversize and/or high value orders may require additional shipping charges.

Items in stock will ship within 24 hours. If delivery will exceed 7 days, an accurate date will be given within 24 hours or you can call to confirm 1.239.227.2932 or email to info@exquisitetimepieces.com. If you pay with eCheck we will ship your order after the 7-business-day holding period before funds are released by your bank. Orders placed on weekends and/or holidays will be processed on next business day.

Insurance: Exquisite Timepieces insures each purchase during the time it is in transit until it is delivered to you. FedEx obtains a signature from any person at the delivery address. If no one is at the address, FedEx will reattempt delivery; Direct Signature Required overrides any recipient release that may be on file for deliveries to nonresidential addresses.