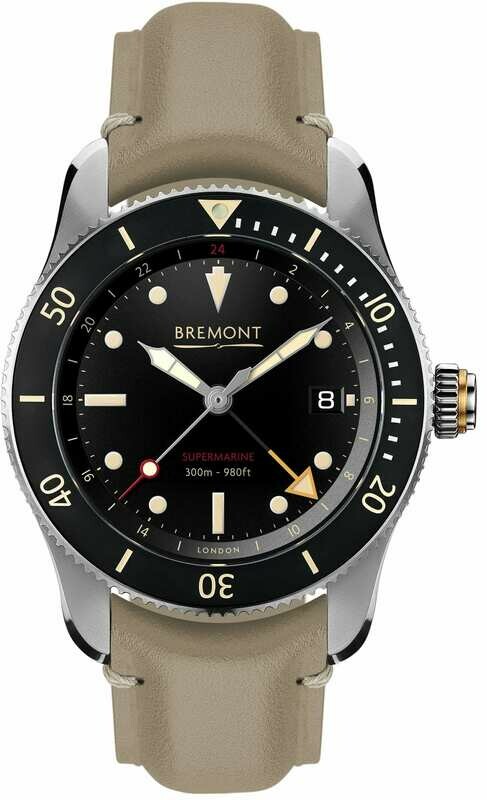 The new S302 joins Bremont’s Supermarine Type 300 range, a range that responded to a demand for a professional dive watch in a slightly smaller iteration at 40mm. The vintage aesthetic follows on from its predecessor, the S301, but with added GMT functionality. The burnt orange GMT hand beautifully complements the 24-hour markers seen around the watch’s dial ring and the colour applied indexes which use the company’s iconic ‘P-51’ Super LumiNova. These details are further accented by the new Sahara Vintage leather strap against the black dial of the S302.

The trademark of the Supermarine collection is that it highlights the connection between sea and air, a range that has been designed for the water but very much inspired by aviation principles. Turning the watch over reveals a closed case back with an etching of the Supermarine Seaplane, a nod to the watches’ namesake, the 1930s aircraft company, Supermarine, whose first ever Spitfire prototype (the Type 300) led to one of Britain’s most iconic aircraft. The new model incorporates a uni-directional ceramic rotating bezel and is manufactured using Bremont’s Trip-Tick® three-piece case construction, housing a beautifully finished and chronometer-tested movement.

Bremont’s impressive line-up of ambassadors never cease to amaze with the extraordinary challenges they continue to take on and running legend Nick Butter’s latest is no exception. Aptly named “Run Britain”, Nick will attempt to run 200 marathons in 100 days around the coast of Britain, becoming the first person to run 100 double marathons back-to-back. Nick will be wearing the new S302 to keep an eye on his timing as he runs the 14 hours a day to cover the 52.4 miles that equates to a double marathon, every day for 100 days. He will run a total of 5,240 miles.

Over the last 10 years, Nick has taken on countless running endurance challenges all over the world and to date has clocked over 45,000 miles, completed 828 marathons, claimed 4 world records, 2 world firsts and has a reputation for pushing the boundaries of what most deem as possible.

Shipping for Orders on Exquisite Timepieces:
All orders over $1,000 within US are elegible for Free Shipping. Shipping for orders under $1,000 is $35.
International Shipping:

International orders are Shipped via FedEx, this orders may be subject to Customs Duties and Tax regulations specified by the designated country, and are the sole responsibility of the customer, the average International order takes up to 1 week for delivery. Oversize and/or high value orders may require additional shipping charges.

Items in stock will ship within 24 hours. If delivery will exceed 7 days, an accurate date will be given within 24 hours or you can call to confirm 1.239.227.2932 or email to info@exquisitetimepieces.com. If you pay with eCheck we will ship your order after the 7-business-day holding period before funds are released by your bank. Orders placed on weekends and/or holidays will be processed on next business day.

Insurance: Exquisite Timepieces insures each purchase during the time it is in transit until it is delivered to you. FedEx obtains a signature from any person at the delivery address. If no one is at the address, FedEx will reattempt delivery; Direct Signature Required overrides any recipient release that may be on file for deliveries to nonresidential addresses.