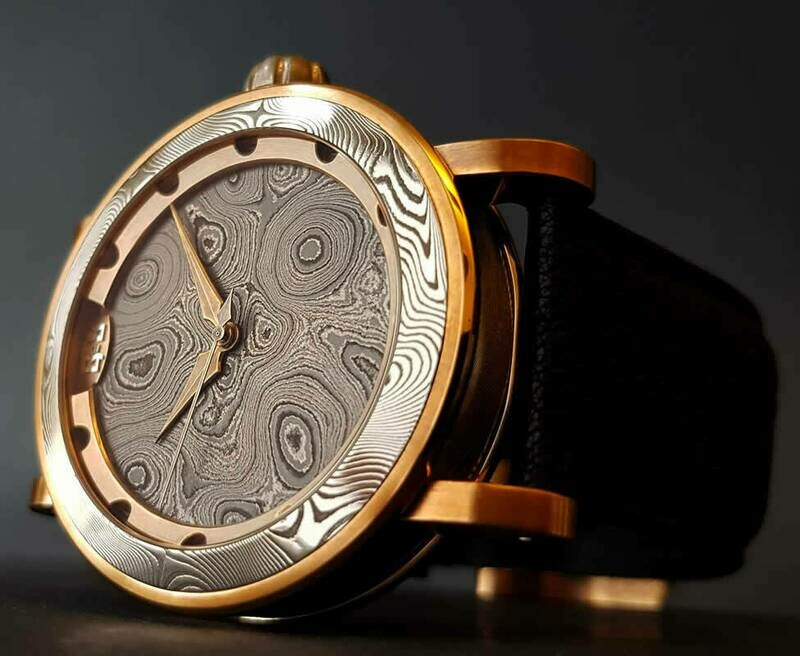 The Byzantine Emperor founded the Varangian guard around the end of the 10th century to serve as elite troops and his own personal bodyguards. The guard members were Vikings and the origins of the name Varangian is from the Norse name Väring and the word Vár, which means Fidelity. During the same period, a man destined to be a local Viking leader was born in the village of Kareby. Kareby later grew to become Linkoping, and that mans name was Väring.

It is now 1000 years since Väring and his crew returned back after having supported King Knut when he claimed the English throne in 1016. One can only imagine how he was greeted upon return with their share of the reward. GoS honors the 1000 year anniversary of Värings return by creating our first Bronze watch. Bronze was the most common metal to be used and mastered by Vikings. Steel was mainly for weapons while Bronze was preferred for most other items, both decorative and functional. The case of GoS Väring has a center ring in Stainless damascus steel while all other parts are made of Bronze. The shape and overall design of the case is recognizable from previous GoS models but with new viking-inspired details added. Some of the changes are subtle, like the lug shape which has been altered to better resemble the bow ornaments of viking ships. Others are immediately identifiable as viking elements such as the viking loop knot patterns on the lugs, for example.

The chapter ring and hands are also made of Bronze and share the same finishing elements with rich contrasts between pre-patinized slightly darkened surfaces and polished chamfers. GoS has always aimed to create rich contrasts in our Damascus steel finishing and bring this to the Bronze finishing too. The hands for the Väring watch features the familiar viking spear outline but will premiere a newly developed surface finishing that makes the surface appear to be curved, just like spear heads. It is inspired by the traditional Swiss Côtes de Genève but done in a new way.

Prince Knut of Denmark needed brave and skilled men to help him claim the throne of England after the death of his father in 1014. His brother Harald, who was then King of Denmark assisted his brother in gathering a fleet of Vikings. The news of Prince Knut´s plans quickly spread throughout southern Scandinavia and the local Viking leader in Kareby and his younger brother decided to join as allies. Väring gathered a crew of the bravest men in the region to sail towards Denmark and join the large fleet during spring of 1015. The fleet set sails for England with an estimated 200 longships and was described by Queen Emma of Normandy to have “so many kinds of shields, that you could have believed that troops of all nations were present. … Gold shone on the prows, silver also flashed on the variously shaped ships”.

The force was to engage in many hard battles of which practically all were fought against the eldest son of King Ethelred II, Edmund Ironside. Knut was able to conquer England bit by bit and claimed the throne in 1016 after King Ethelred died in April 1016 and his son was finally defeated in Essex, in October of the same year. After two years, King Knut felt sufficiently in control of his new kingdom to the extent of being able to pay off all
but 40 ships of his fleet with their share of the Danegeld. Danegeld was a tribute vikings collected and King Knut had a total of almost 30 tons of silver coins minted during his first two year in England. Some of Väring´s men stayed in England to join the King´s elite troops while Väring returned back to Kareby with his share of the Danegeld. His younger brother was however one of the many Vikings who died in the battles. Väring honored him by having a large stone carved and erected on a hill upriver from Kareby.

GoS presentation box
Designed by GoS and Handcrafted by Kanevad’s master woodcarver, Håkan Jansson. The box is made from solid Walnut and has a unique sliding lid. The box is finished with fine sanding and protected with finest paraffin oil. The Kanevad wood-carving studio is known around the world for its sculptures, art objects, clever playthings and their much appreciated traditional utensils. http://www.gamlalinkoping.info/en/food-and-shop/shops-and-craftspeople

The watch is mounted on a soft cylindrical pillow made from reindeer suede which is secured inside the box.