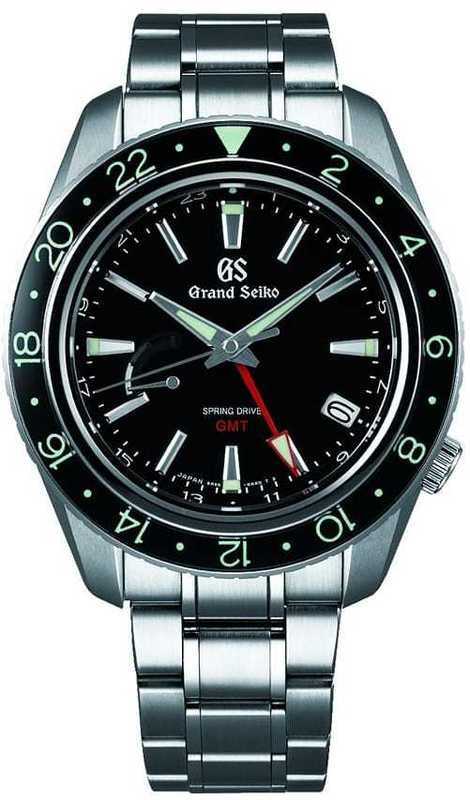 The Grand Seiko Spring Drive GMT SBGE201 Watch is water-resistant for up to 200 meters which is equivalent to ~656 feet. This feature ensures that the piece can withstand any water pressure that it's put up against regardless of the level it might be at. In addition to this, the clasp has a push-button release for when the watch is being put on or taken off.

Such a function grants each individual the ability to dismiss having to remove the watch the hard way and cuts his/her time in half. Not only that, but it's certain to secure the watch so that the clasp doesn't unintentionally pop open when one moves his/her wrist. The strap is also stainless steel and includes a threefold clasp with a push-button release - as an added bonus to the reliability of the piece.

The watch's strap/clasp, however, isn't the only detail that is made in stainless steel, the case is too. With this in mind, the durability of the watch wraps all the way around at a 360-degree angle. The material alone seals the piece and helps protect it against scratches, and other unplanned circumstances.

Furthermore, the Grand Seiko SBGE201 has a beautifully crafted mint green luminescent color - incorporated into part of its design - which can be seen on the outer ring, and on the face of the piece. This only adds to the luminous look of the hands and markers which help the time to be read even in dark conditions when the person is out during the late evening hours or underwater.

Not only that, but the red hand is striking in appearance, and carries a remarkable contrast against the dial color which comes in a dark shade of black. This allows the GMT hand to be easily seen since it follows a lighter color scheme. The point of the arrow itself is also large in size which helps it stand out from the rest of the watch, while still serving as a nice addition to the silver shine of the other two hands.

The outer ring does little to interfere with the design of the piece because it too is crafted with a black background that matches the watch's dial color. In fact, the same dial can be seen on the inside of the watch in small white numerals. This offers a sophisticated display because while a bigger ring lies on the outside, a smaller ring lies on the inside.

Each dial marker is uniquely created as the 12 o'clock, six o'clock, three o'clock, and nine o'clock are thicker in appearance; these add to the second hand, and minute hand, as they too have a much thicker design, which adds an edge-like style to the watch as a whole. The rest, however, take on a slimmer look. In addition to this, there is a power reserve dial - so that each person can see exactly how much he/she has used, and exactly how much he/she has left - as well as a date dial.

As a result, the watch is specially made to endure almost any and every circumstance that it is put up against. The Grand Seiko Spring Drive GMT SBGE201 Watch is also designed with a screwed case back and screwed crown for worry-free wear while proceeding with day-to-day tasks, and/or weekend adventures that require nothing less than durability. This piece is priced at a total of $5,800.00, includes a full factory warranty, and can be easily found on Exquisite Timepieces where various financing options are available based on the buyer’s preference.

● Watch is specifically conditioned for deepwater diving with a resistance of up to 200 meters (and/or the equivalent of ~656 feet).

● Watch has date dial function so that time can be navigated with more precision.

● Sapphire crystals have anti-reflective coating so that the watch can still be easily read while underwater, and/or even in the sun.

● Watch’ markers are beautifully designed and take on either a rectangular or triangular pattern adding to the overall look of the piece.

● Watch has a stainless steel strap - with a three-fold clasp - and push-button release to prevent the piece from slipping off the wrists of those who are frequently engaged in various activities.

● Watch has a power reserve component.

● Watch is made to endure a number of circumstances/conditions in the form of day-to-day tasks, and/or even weekend adventures.