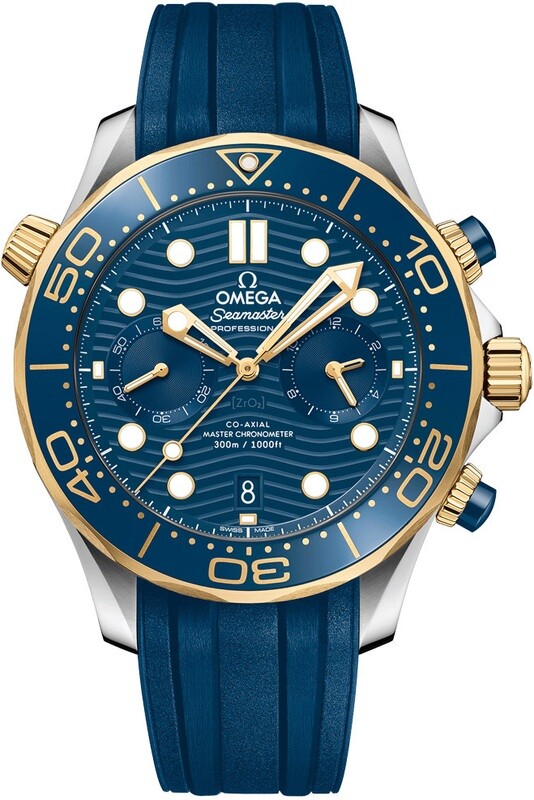 Omega has been on a mission to provide exceptional luxury since 1848. After years of development, Omega has perfected its technology with its latest addition, the Omega Seamaster 300 Sedna Gold. This timepiece offers unique, luxurious features that have once again proven the brand’s commitment to providing the highest quality luxury watches.

This stainless steel, yellow gold Omega Seamaster 300m watch is 44mm in diameter, 17.3 mm thick, and has a 52.5 mm length from lug to lug with 21 mm space between the lugs. It has a 16cm circumference and rubber straps.

This watch has the latest version of the straps that debuted on the 2018 standard diver 200m Omega Seamaster watch- blue rubber straps with the famous Omega wave on the underside. The straps are made of two striations with brushed granular patterns that run vertically down the strap on the outer side. To finish off these comfortable, strong rubber straps, Omega has added a polished steel-pin buckle and branded free loop that has been redesigned to fit your wrist perfectly.

This bezel is made with a technological blending of ceramic and 18k gold, forming a material known as Ceragold, known for its scratch resistance and ability to avoid oxidation and tarnishing. The rotating bezel is firm and does not shake while moving. It has a 0 to 60 minute timing scale that can be used for timing, just like the chronograph. Additionally, its 0-60 timing scale complements the chronograph, which reads up to 30 minutes.

You can use the crown for time zone adjustments, a feature that has been missing from the Seamasters. The crown also provides a high water resistance.

Another addition features blue ceramic pushers that can be activated or deactivated just by a press without the need to screw down the shoulders. The shoulders now act as sheer guards to add strength and protection to the blue ceramic crowns, which are scratch and water-resistant.

Another subtle feature in the Omega Seamaster Diver 300m is the Helium Escape valve, which can be opened while still underwater or while ascending from saturation dives. If you think helium may be inside the watch after a dive, you can open the Helium Escape Valve while still in the water to release the internal pressure.

Made with ceramic, the dial glows on its top, creating the beloved wave pattern first seen on Omega Diver 300 watches in 1993. The watch also features a mini dial that displays the date.

The golden hands are equipped with a time zone adjustment feature, which was absent on the standard Diver 300m. Pull it out to stop and adjust the time and press it to set it back.

There is a lot more than meets the eye under the transparent underside casing. Inside the case, twin mainspring barrels give you a 60hr power reserve and are powered by premium caliber 9900. The twin mainspring barrels provide better precision and lower maintenance requirements in addition to the long power reserve. For shock resistance, it has a full bridge and free spring index. It is also equipped with a silicon hairspring which makes the watch effectively anti-magnetic.

This watch is a master chronometer, which means it meets the COSC standards, which feature tests on power reserves, chronometric performance, water resistance, anti-magnetism, and winding efficiency. All of these are part of the master chronometer test devised by Omega in collaboration with the Swiss Federal Institute of Meteorology.