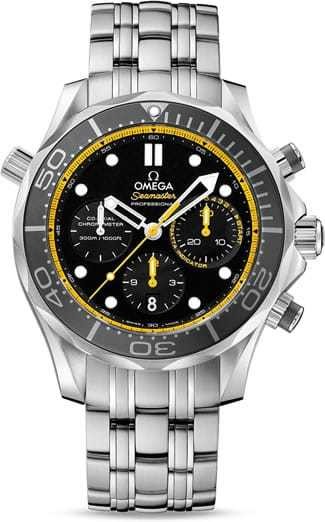 This timepiece is currently not available. Join the waiting list to be notified when this piece is available.

It’s the sporty version of the Omega Seamaster Diver 300M collection. It’s also a legendary tribute to the maritime legacy held by Omega. The timepiece is one of the best divers’ timepieces in the market. This timepiece represents significant scaling of the original piece that was first produced in 1993.

This evolved timepiece has gloss tiles and ceramic vessels after 2012. It has maintained its case profile, its famous v link bracelet, and the same bezel (though upgraded). It has iconic skeleton style hands. Despite having a 44mm diameter the timepiece is easy to wear. The watch is fit and secure. The watch has 17.2 mm thickness, and might be a challenge fitting under the dress cuffs, hence best worn for casual or business casual, if not for diving. The watch can survive comfortably during hard-core sporting. The watch is a reasonable compact from Log to Lug (52mm).

The steel bracelet has solid end links. The underside design of the bracelet has plenty of channels to aerate the wrist. The bracelet is also a rounded profile where the links meet to avoid pinching the skin and pulling the hair. The watch has undergone several upgrades since the Bond era. It features the same five-link design which has been upgraded. The edges of the bracelet are more squared off than rounded. This gives the timepiece a more modern aesthetic look. The screws on the bracelet are now used for sizing the removable links. The claps have been upgraded, it's more solid and features a polished pusher. The Omega engraving is still present. There is a hairline bevel along the flank. The diving extension is the best among the Omega diver watches. The timepiece is sturdy with tight tolerance levels, hence excellent to use over wet or dry suits.

• Chronograph: the watch is complicated and the ability to measure short periods. This doesn't affect its ability to permanently display hours, minutes and seconds.

• Date: the day of the month which is displayed on a watch dial either at the 3 o’clock or 6 o’clock handle.

• Regatta timing: a function on the timepiece which allows for easy reading of the important regatta time intervals.

• Chronometer: This is a label given to a timepiece that has received a certificate from an official body like COSC after undergoing precision tests.

• Helium escape valve: the decompressing system of the watch allows the helium to escape from the timepiece, this happens if the watch is worn during professional use in pressure chambers.

• Screw‑in crown: the crown on the watch is self-locking. It’s carefully screwed into the tube of the case. This is a feature used in water-resistant timepieces.

Omega did its first launch of the Seamaster Professional 300M in 1993. This was a strong return of the diver’s timepieces. This new line was fitted with a screwed helium valve which was very distinct. It also had two formats. The first being the world-first chronograph, which had a pusher functionality up to a depth of 300m. The second was the standard 3-hand-and-date timepiece diver which contained a chronometer status. The Seamaster Professional 300M was indeed a timepiece to behold. Some of the distinct features of the watch that stood out include:

• At 10 o’clock there was a helium escape valve.

• Blue dial in a wavy pattern.

• A crown that is screwed and contains protective shoulders.

• The first models had applied tritium on the hour markers.

• A steel bracelet having an extension system for easy fitting over a wetsuit.

The Omega Seamaster Diver 300M is one of the iconic pieces from Omega which are considered to be long-running. The Seamaster collections show the changing tastes and technology which have been experienced in the past seventy years. The first Omega Seamaster Diver was produced in 1948. It was a civilian version of the timepieces supplied by Omega to the British Air Force, during WWII. Ideally, it wasn't a diver's watch but was designed to be a resilient timepiece that is also water-resistant. And could be worn in any situation. The watch has evolved into the shapes you see in the Omega Seamaster Diver 300M 212.30.44.50.01.002.