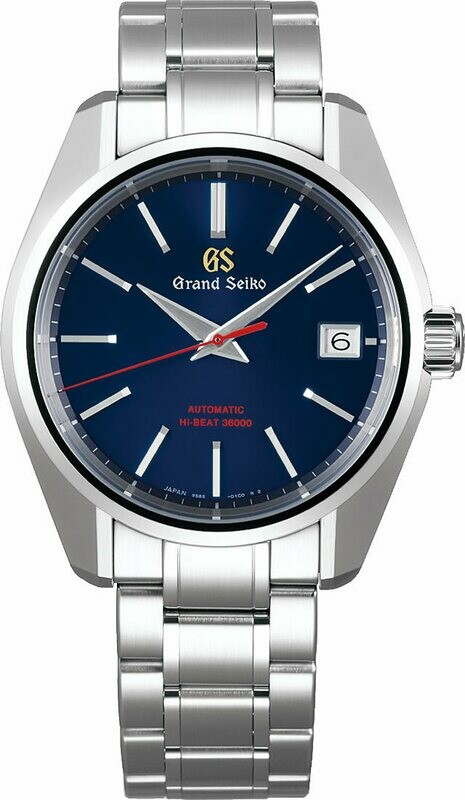 Its been 60 years since Grand Seiko released their very first watch, and they have been consistently releasing top-notch designed watches since. The Grand Seiko SBGH281 is no different in class or quality as compared with any of the watches made by the Japanese timepiece maker. To mark 60 years anniversary of excellence, Grand Seiko released the four new watches among which the SBGH281 (Heritage collection) belongs.

Finished in the typical high standards of Grand Seiko, the SBGH281 is a refined version of the classic 1967 44GS watches. It contains the Hi-Beat caliber 9S85 which is capable of oscillation of 36000 vibrations every hour. To further solidify its class, Grand Seiko made only 1500 pieces of this beautiful piece, making it a limited-edition watch for men who appreciate design, and also enjoy a feel of class when it comes to wristwatches.

Riding on the waves of the 44G5 design of its 1967 first releases, Grand Seiko applied the best in making the exterior of the SBGH281. The case is made from high-quality stainless steel with a brushed finish. The 40mm by 13.3mm casing is covered by dual-curved sapphire crystal glass that is chemically treated with coatings on the inner surface to be anti-scratch and anti-reflective. To fasten the watch in place, 3-link stainless steel bracelets are attached to the casing, and this comes with a three-fold clasp that has a push-button release for easy strapping and unstrapping.

Furthermore, another lovely feature of the exterior of the Grand Seiko SBGH281 is the back of the casing. The back is screwed down to provide a shield against the influx of water, thereby protecting the working mechanism inside the watch. The back of the casing also has the signature lion emblem, it is screwed down and so also is the watch’s crown.

Other features of the exterior are: The watch’s serial number is engraved on its back, the words “LIMITED EDITION” is written on the back of the case along with a few other relevant write-up, etc. As a whole, the SBGH281 weighs about 156.0 g, which is a weight that won’t put any strain on your wrist no matter your hand size.

To complement its looks, the Grand Seiko SBGH281 runs on an in-house, automatic with a manual winding capacity 9S85 caliber movement system. Using 37 jewels, the 9S85 movement system of the SBGH281 comes with a lot of benefits.

Firstly, this movement system is made with only the best-handpicked materials not only to ensure the durability and longevity of your watch but also to ensure that the watch performance is a high standard. Furthermore, the curator of the 9S85 caliber system ensures precision, thereby creating a system with impeccable accuracy. The system boasts of a ±5 to ±3 seconds accuracy per day when static (not in use) and about +8 to -1 seconds when in normal usage.

The 9S85 caliber of the Grand Seiko SBGH281 also has a power reserve of approximately 55 hours (over two days) and it can run concurrently for this tie frame before it needs another charge/winding.

A good watch is not just a fashion item that hangs on the wrist of the bearer. Beyond its fashion qualities, the functions a watch provides determines how it is rated among people who are familiar with the world of watches. The Grand Seiko SBGH281 doesn’t lack in the aesthetics/fashion department, neither does it lack in functionality either.

Of notable mention among its functionality is its water resistance capacity. Rated at 10 bars, the SBGH281 offers you water resistance to a depth of 100 meters. This protects you from the fear of damage when your watch comes in contact with water. The watch offers magnetic resistance (rated 4,800A/m), which means that it retains its accuracy even when it is used in an environment with a magnetic pull.

Among other functions are its stop second-hand capability, date display, 55 hours power reserve, and its ability to maintain its accuracy even in extreme weather.

Grand Seiko prides itself as one of the best when it comes to making display/dials for watches. The Grand Seiko SBGH281 comes with a rich blue dial that is soothing to look upon. Although the dial doesn’t come with Arabic numerals, the Zaratsu polished stainless-steel marker used in its place does justice in identifying the 12 hours. The second’s hand is red in color, while the hour and minutes hands are made of stainless steel, with the Zaratsu styled polishing (The Zaratsu polishing technique is the same technique used for the legendary Japanese sword).

Just below the 12 o’clock mark, the legendary Grand Seiko ‘GS’ logo is written in gold, while a date window sits at the 3 o’clock mark. A combination of the blue dial, the red second’s hands and some words written in red on the dial, and the GS logo in gold symbolizes sunrise and gives a feel of a new dawn.

Finally, to give the owner a wonderful view, Grand Seiko included a see-through case back that allows the bearer of the watch to see the beautiful 9S85 caliber movement system in work.