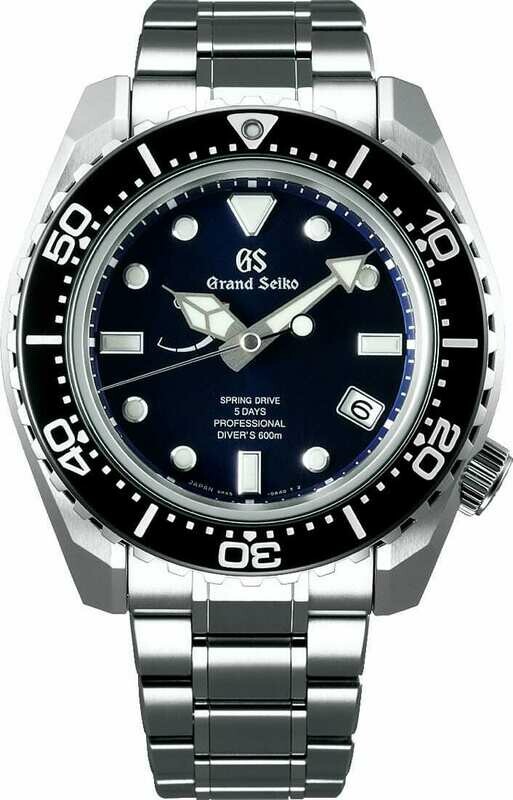 Grand Seiko SLGA001 is one of the limited-edition, Hi-beat watches made by the Japanese watch conglomerate. With only 700 pieces of this timepiece made, Grand Seiko ensured that perfection was attained with the design and mechanism. This titanium made masterpiece is powered by a new version of the spring drive movement. Aside from the quality of material used in making this watch, the movement mechanism – Spring drive 9RA5 – boasts of so many benefits, the owner of any of these watches will enjoy value for their money. The 9RA5 is an upgrade to all the existing spring drive models ever created. It has better accuracy, more power reserve, it can be used to dive in water (very high-water resistance), and it has magnetic resistance.

Grand Seiko incorporates the signature magic lever system which was repositioned away from the mechanism center that allows it to sit flatter under the winding rotor. Furthermore, the gear train layout of the movement mechanism has been tweaked to ensure stronger construction and higher resistance to shock. According to Grand Seiko, the SLGA001 is the first of their watches to have a thermal sensor for temperature compensation. This is to ensure accuracy as the difference in temperature contract or expand the moving part of the watch’s mechanism which can impact the accuracy.

In conclusion, the Grand Seiko SLGA001 is not your regular everyday sports watch. It is a high precision, spectacular holographic innovative timepiece, created in limited quantity for men of the class who appreciate design and exquisite workmanship

As customary of Grand Seiko, attention to design and workmanship is not neglected in creating the SLGA001. The casing of the watch is made from high-intensity titanium which is polished and given a brushed finish. The 46.9mm by 16.0mm casing has a unidirectional rotating bezel – 60 minutes scale – that is also made from the same material as the casing. The casing is chemically finished to resist helium intrusion making it a watch suitable for diving (a plus for swimmers). The bracelet of the watch is a three-linked bracelet made from titanium.

The bracelet is held in place by a three-fold clasp with a push-button release clasp or easy strapping. One of the unique things about the material and the size of the casing and the bracelet is that it is exceptionally light (about 30% lighter than contemporary stainless-steel watches). The lighter weight of the SLGA001 reduces the strain you feel when you wear the watch. The glass covering of the SLGA001 is made from high definition sapphire crystal which is scratch resistance.

Finally, the back of the casing has the lion emblem, the crown is screwed down to ensure water resistance, and the case back is also screwed down. A couple of inscriptions are on the case’s back. They include a serial number, and the words “Limited Edition” among others.

Built to improve on accuracy while reducing power consumption and wear and tear, the 9RA5 is an improvement on its other predecessors. The movement mechanism has a ±0.5 second accuracy per day which is an equivalent of (±10 seconds per month)

Running on 38 jewels, the 9RA5 is self-winding, and it is designed to utilize just the right amount of torque to reduce its power consumption considerably.

Beyond aesthetics, there are other functionalities that make the Grand Seiko SLGA001 exceptional. Of notable mention is its amazing water resistance capability. The SLGA001 has a water resistance of 2000ft/600m which makes it a watch suitable for divers and swimmers. Another major function of interest of the SLGA001 is its power reserve. This wristwatch boasts of a staggering 120 hours power reserve which is quite impressive for a watch of its size. This means that the watch can work for 5 consecutive days without requiring winding/charging. To further enable the user to enjoy the power capability of this watch, there is a power reserve indicator on the screen to help the user monitor the depletion of power.

Magnetic resistance is another function that the SLGA001 is equipped with that makes it a watch to have. Most watches’ intricate/moving parts are made from metallic materials and are susceptible to magnetic distortion. With a magnetic resistance of 4800 A/m, you don’t need to fear that your watch’s accuracy will be affected if you come near a magnetic field.

As usual, Grand Seiko paid attention to making the dial and display of the SLGA001. The dial of the watch is deep matte blue that brings back the memory of the inky deep. The dial is not marked with Arabic numerals but by LumeBrite-filled hour marker and hands.

The dial has a date window at the 4:00 o’clock position, and also a power reserve depletion indicator that is graduated in days to show as power usage drops with a small red hand for easy reading. Grand Seiko signature “GS” logo is written just below the 12.00 o’clock position