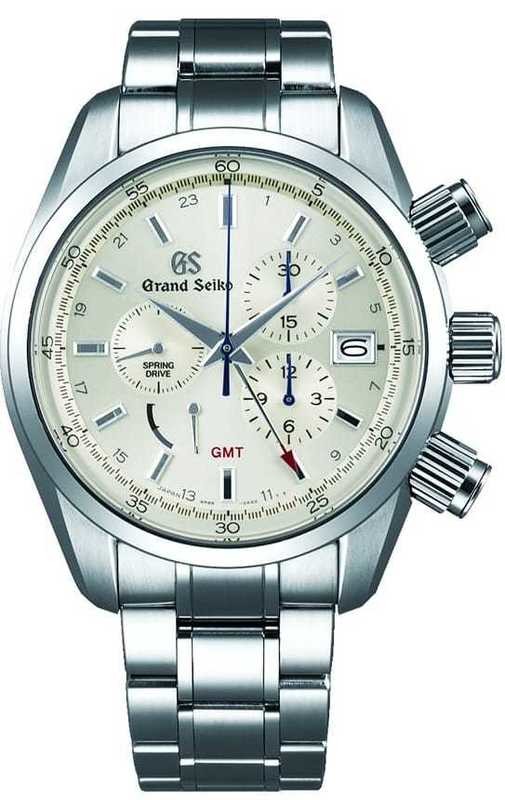 An impressive addition to their catalog, the Grand Seiko SBGC201 is an impressive piece in their aptly-named Sport collection. The SBGC201 is the first chronograph ever designed by Grand Seiko, making it even more unique. Sleek and unassuming, it features a durable brushed stainless steel case coupled with dual-curved sapphire glass. The glass used for the SBGC201 also has an anti-reflective coating to help reduce glare.

Grand Seiko’s Sport collection embodies the company’s qualities with regard to design and functionality. It also aims to offer a range of rugged and versatile watches that also affect an air of elegance. The SBGC201 is an excellent piece for any collection and is resistant enough to wear every day without fear of weathering.

The heart of the Grand Seiko SBGC201 is its Spring Drive movement 9R86 caliber mechanism. This device is a mix between a mainspring and a more traditional quartz watch, combining both quality and precision. This remarkable mechanism allows the wearer to enjoy precision timekeeping with all the benefits and accuracy expected from a chronometer… only better! This mechanism is further improved with a 72-hour power reserve feature. The power reserve indicator is located between seven and eight o’clock.

The Grand Seiko SBGC201 doesn’t require an external power source to maintain precision accuracy. Instead, its Spring Drive employs an electrically-powered regulating mechanism. The electricity required to power this mechanism is generated when the wearer mechanically winds the mainspring. This is enough to power the SBGC201’s quartz oscillator, which, in turn, works to maintain proper timekeeping.

In keeping with Grand Seiko’s visionary style, the SBGC201 uses a glide motion mechanic for the seconds hand as it sweeps around the watch face. The second hand is an eye-catching understated blue steel design that can be accurately adjusted with the SBGC201’s stop-seconds hand function. Magnetic resistance, along with scratch-resistant sapphires, makes it even more long-lasting.

Other features include a 24-hour dual-time display and function for calendar-linked time difference adjustment. The SBGC201 is beset with 50 separate jewels but is still rugged enough to employ 10 bar water resistance capabilities. This won’t allow you to dive with the Grand Seiko SBGC201 but will protect the watch up to depths of 100 meters.

Another useful addition to the SBGC201 is the ability to track time in two separate time zones. The second time zone is indicated by the red arrowhead on the dial. This hand moves more slowly, completing a full revolution in 24 hours. This helps avoid confusion between day/night cycles in the second time zone.

This watch employs a screw case back and a three-fold clasp with a push-button release mechanism. A screw-down crown stays put while the see-through threaded case back with sapphire crystal adds an extra element of depth to the watch itself. This feature also helps to improve water resistance.

The Grand Seiko SBGC201 weighs 187 grams, or about six and a half ounces, with a case size of 43.5mm by 16.1mm. Thanks to Grand Seiko’s Spring Drive movement mechanism, the SBGC201’s movement is accurate up to an average of +/- 1 second per day and +/- 15 seconds per month. It has a round case and comes equipped with an automatic movement. The SBGC201 also uses sleek analog dials.

The Grand Seiko SBGC201 has a lot of fine details, including fractions of seconds being featured on the dial flange. Additionally, applied polished index hour markers and polished hands help round out the luxurious feel of the SBGC201. To cap it all off, the silver dial with a sun-ray finish suggests understated elegance.

The small seconds sub-dial is located just above the power reserve indicator, to the right of nine o’clock. The other side of the watch houses the date window, which is found just to the left of three o’clock. Furthermore, the 30 minute chronograph counter is placed between one o’clock and two o’clock. The second chronograph 12-hour counter is similarly between four o’clock and five o’clock.