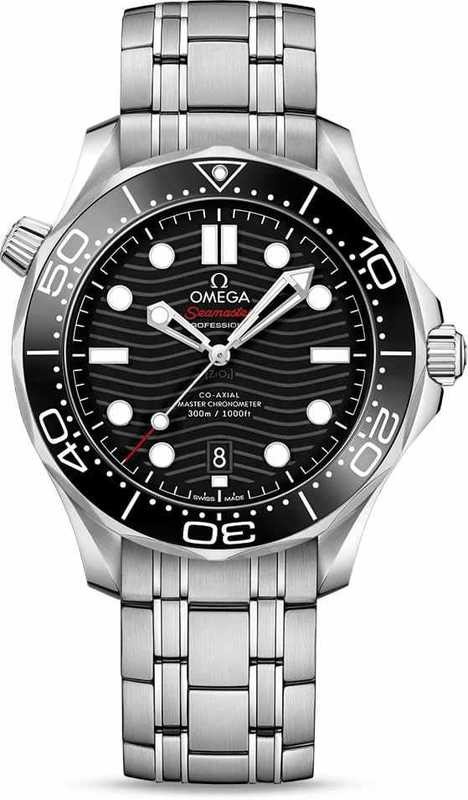 The Omega Seamaster Diver 300m 210.30.42.20.01.001 is steel on steel timepiece from Omega. The bezel and black ceramic of the watch represent the original look of the first Omega Seamaster Diver. The first model of this watch was released in the year 1993. Intended to be a stiff competitor of the Rolex Submariner. Even 25 years later the timepiece still stands out among its competitors because of its distinctive design. There is high competition in the high-end dive watch space, as many users seek utility, style, prestige, and status in a watch.

By today's standards, the watch might seem a little costly, however, this is adequately compensated by Omega when you look at the value of the watch. The watch has an 8800 automatic movement which is an in-house made caliber. A look at the Co-Axial escapement, you will notice that the caliber is immune to external effects caused by environmental magnetism. It also has a balance spring made of reliable silicon material. The watch also has an Omega’s METAS Certification seal. The seal includes the COSC Chronometer certification. The automatic movement of the watch operates at 4Hz and has a power reserve of 55 hours. In addition to that, there is a time and date window complication. The final result is a mechanical movement that is very resilient, reliable and accurate. The exact thing looked for by many people in a divers' watch.

When looking at the size, the newest model of the Omega Seamaster 300M is bigger compared to its predecessors. The outgoing generation had a 41mm size, but this new generation is a 42mm wide case. The wide case of the watch has a water resistance level of 300 meters. The thickness of the case is 12mm, with a lug to lug distance of 50mm. The case offers wearing comfortability, though it might seem heavy especially when paired with the steel bracelet. The subtle updates of the case that stands out would be the tapered helium release valve crown, found at the 10 o’clock sign on the case. This new moderation in design creates a distinct difference between the old models and the new models of the Omega Seamaster 300M.

Omega has retained the old school technology of the helium release valves. This feature is rarely used unless you are a commercial diver. The feature can be manual or automated, however, Omega has retained this vestigial element in what can be described as a modern-use high-end sporting timepiece. Omega maintains visual distinction by holding on to the helium release valve feature in the Omega Seamaster Diver 300m 210.30.42.20.01.001. The feature visually distinguishes this timepiece from the other diver timepieces in the market.

The case of the Omega Seamaster Diver 300m 210.30.42.20.01.001 has an all-round beauty, which plays an important role in making the watch a stylish high-end diver watch. The watch despite having a small element of luxury, the design of the watch is more about utility and function than about the style. The case has a bezel rotation tactility which lacked in the previous model. The bezel has a ceramic insert, available in black and several other colors (depending on the model). The watch has a 300M Co-Axial Master Chronometer case, which contains a case back made of sapphire crystal exhibition. This is also another new feature in this model of Omega.

The dials are another feature of the watch that one can’t miss. The hands and hour markers are very large and visible and are relatively high off the watch’s dial. They are also polished, very useful in making them visible by contrasting with the black ceramic dial. Because the dial can pick up light and reflect it, it becomes more legible.

The dial is black ceramic, with horizontal wave patterns. The patterns were also present in the dials of the original Omega Seamaster Diver 300m. However, there were some updated models of the Omega Seamaster Diver 300m which lacked the horizontal wave patterns. This new model of Omega has however brought up the wave patterns feature demonstrating a neat laser etching found on the dials. The watch is available in both rubber straps and steel bracelets.

The pricing of the watch is more affordable compared to its competitors like the Rolex Submariner. The watch retails at just under $5,000. You can find the Omega Seamaster Diver 300m 210.30.42.20.01.001 at the Exquisite Timepieces where you can enjoy a wonderful discount on the timepiece and other watch accessories. The watch performs well all the things that a reliable diver's watch is supposed to do. In addition to that, the watch boasts of graceful aging design and great legibility.