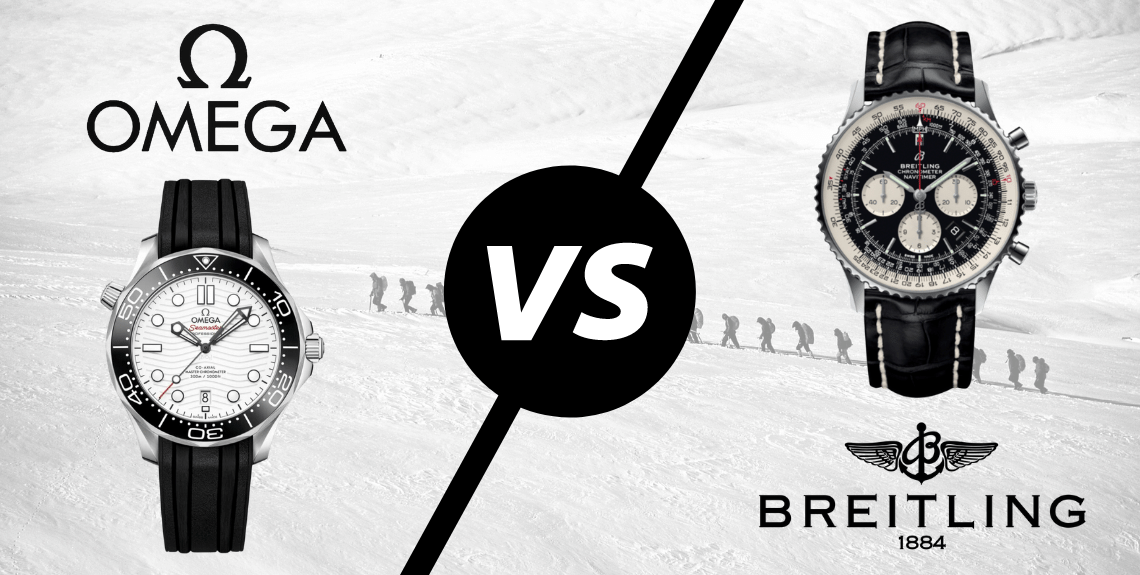 With so many options on the market, it’s hard for watch enthusiasts to pick the best watch that meets their needs. As a watch enthusiast, you have to compare different watchmaking brands. Which is better, Omega or Breitling? When comparing these two brands, we show you the essential things to look for when purchasing a new watch. When comparing two brands, people will have different opinions, that’s why our team of experts is giving you a detailed review of these two big brands, Omega vs Breitling. 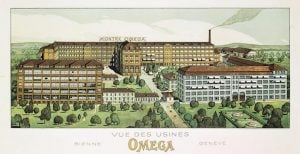 Both Omega and Breitling have a rich history in the watchmaking industry. Omega was founded in 1848, four decades earlier than Breitling, which was founded in 1884. The two brands for more than a century have been known for innovations and making high-quality watches. Despite this similarity, the two brands have their differences. Breitling has a rich history in aviation, making reliable and high-quality chronographs, which have gained massive popularity among watch-connoisseurs. On the other hand, Omega has been very diverse with its creations, the most notable being the moon collection, which has a watch model that was worn to the moon.

Omega vs Breitling: Style and Movements

The movements are arguably the most important part of any watch. Different top brands are always trying to upgrade their movements. The movements are the heart of the watch, and all watch connoisseurs are impressed and attracted to the best movements a brand can offer. Having an in-house watch movement is an excellent achievement in the watchmaking industry. The two brands both have in-house movements, but they also have some of their models using externally sourced movements.

Compared to Breitling, Omega produces its own in-house movements, which are more complicated and have the best technology. For this, Omega has gained a reputation for making the best watches compared to Breitling. For many years, Omega has worked hard in making unique movements, which are extremely complicated, something that Breitling hasn’t focused on. Breitling has been focusing on the mass production of unique and innovative watches.

When looking at innovations of Omega vs Breitling, Omega stands out compared to Breitling. Since it started operating more than a century ago, Omega has made impressive innovations in the watchmaking industry. One of the iconic innovations that have been produced by Omega includes the “Master Co-axial anti-magnetic.” The Omega brand has also created a watchmaking culture where they experiment with new and unique materials, like different types of titanium and gold and liquid metals. Breitling has also tried to be innovative in its watchmaking processes, experimenting with new materials like carbon fiber.

The Omega Speedmaster model is considered the most iconic watch model from Omega, while the Navitimer is the most iconic watch from Breitling. Due to their distinctive design, the two models have gained respect and global recognition from watch connoisseurs. Even though the two watch models are chronograph watches, taking a closer look at the watches, you will notice the Breitling Navitimer has a much busier dial compared to the Omega Speedmaster. If you are focusing more on the chronograph rather than getting a diver’s watch, you will most likely compare the Omega Speedmaster with the Breitling Navitimer.

The other evident thing when you look at the Omega and Breitling models is the watches’ size. While most watchmaking brands like Omega make averagely sized timepieces, Breitling is known for making very large watches. Thanks to the overall big size of the Breitling watches, the brand has been able to appeal to a specific audience, compared to the averagely sized Omega watches universally accepted by many people. The two brands have an extensive collection of models and variants. Each year, more advanced models are released. For instance, the Omega Speedmaster has many variants, just like the Breitling Navitimer.

When it comes to digital watches, the watchmaking industry has seen very impressive inventions and variations. Omega and Breitling have developed several digital watches meant to be worn differently depending on the wearer’s preference. Breitling has a rich history in aviation, which has played an important role in its watch models. Breitling has created models to be used mostly by pilots. The most famous and innovative model from Breitling is the Breitling Emergency model, which has been described to be quite revolutionary. The timepieces from Breitling are considered to be professional watches. Omega has also released a few models which have been described as professional watches. One professional watch from the Omega brand is the Omega Seamaster PloProf 1200m with a water resistance of 1,200 meters.

Both brands are trying to exceed the current standards in the watchmaking industry. Both Omega and Breitling use innovative new technology to make brand new watches, which are beautiful and functional for watch enthusiasts.

A warranty shows how proudly a brand can stand behind its models. When comparing different watch brands, the warranty is used to determine the highest quality watch brand. As of July 1, 2018, Omega offered a five-year international warranty on all their watches after initially only offering a three-year warranty. The Breitling watches offer a five-year warranty for models equipped with the mechanical manufacture Breitling in-house movement, while the rest of the models have a two-year warranty.

The difference in the Breitling watches’ warranty period can be seen as an issue by some watch enthusiasts. Omega uses in-house movements for all their models, so they don’t need to offer different warranties for their models. Omega extended their warranty period after they had an improvement in the components of their models. The new, improved materials used in-house by Omega are known to make more durable and high-quality movements.

The warranty offered by both brands is important since they both provide unique innovations. Whether you buy Omega or Breitling, you are guaranteed to get a top-notch Swiss brand.

Most watch enthusiasts use price as one of the guiding factors when comparing two brands. When comparing Omega vs Breitling pricing, they both have relatively the same price for their models. Due to their relatively close price range, most watch lovers tend to compare the two brands. You can purchase an entry-level Omega watch at Exquisite Timepieces, and at the same price, get an entry-level Breitling watch.

Omega also has a much bigger global recognition compared to Breitling. Omega’s popularity has been enhanced thanks to the brand being associated with big names like George Clooney and the James Bond movies. Breitling has its ambassadors, but associating a timepiece with James Bond is a big deal.

When comparing the two brands, one might find it hard to come to a definite conclusion. It also narrows down to the personal preference of the buyer. However, Omega stands out to be a much more powerful brand in the global watchmaking industry compared to Breitling. Getting an Omega watch will guarantee you a top-quality watch crafted with an in-house movement and creations from a highly respected watchmaker. At Exquisite Timepieces, you can find your preferred Omega model and many Breitling models.