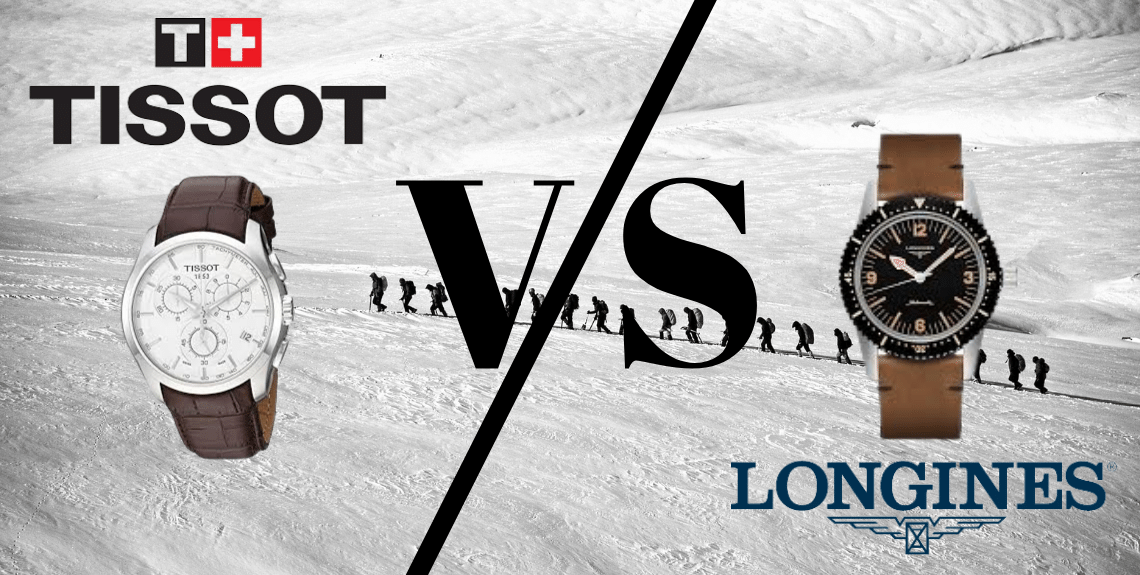 When shopping for exquisite timepieces, most people give Swiss watch brands priority. Tissot and Longines are among the top Swiss watchmaking brands available in the market. This detailed comparison of Longines vs Tissot presents different facts about both of the luxury watch brands. Both Tissot and Longines are members of the Swatch Group, so the two watch brands are under the same watchmaking banner. However, this doesn’t mean they produce the same kind of watch models. Longines and Tissot target different areas of the watchmaking industry when creating their timepieces.

Longines is widely known in the watchmaking industry as a luxurious watch, while Tissot is more popular as a mid-range Swiss watchmaking brand. Even though Tissot isn’t considered a luxury watch brand, they still produce some costly heritage timepieces in their collections. Longines, known as a high-end watch brand, delivers very classy and elegant timepieces. Longines watches’ pricing is very exclusive, competing with other top Swiss luxury watch brands like Omega. When comparing these two brands, the designs and versatility of their models play an essential role. The two brands have a lineage in the watchmaking industry that cannot be overlooked.

The History of The Longines Brand

The Longines brand was founded in 1832 and prides itself in more than a century of watchmaking culture and craftsmanship. Since its inception, the company has managed to build a reputation for making high-end watches. When founded, the Longines watch brand was initially known as Raiguel Jeune and Cie. The brand was based in Saint-Imier, Switzerland. It wasn’t until 1867 that the brand changed its name to Longines and moved its operation to Les Longines, St. Imier.

In 1889, the Longines brand unveiled its logo, which is an hourglass with wings. The logo’s design hasn’t changed since it was created and has remained one of the authentic identifiers of the brand in the industry. Longines being a watchmaking brand from Switzerland means the brand uses the quartz movements used by Swiss watchmaking brands. The Swiss quartz movement is one of the most accurate watch movements in the watchmaking industry. With its impressive reputation of making luxurious watches of high quality, Longines has been awarded several contracts as official sponsors in sporting events. The brand even has partnerships with some top players in the sports industry.

Longines uses in-house movements in their watch models. The first Longines watch model to use the in-house watch movement was the Longines Calibre 20A. The watch was such a success that it even garnered an award during the 1987 Universal Exhibition held in Paris, France. The Longines Calibre 201A features an anchor escapement, which has a pendant and setting watch mechanism. Even though Longines makes luxurious watches, their models are still considered affordable compared to other luxurious watch brands like Rolex and Omega. The Longines brand is one of the respectable members of the Swatch Group Limited.

The History of the Tissot Brand

Tissot is a Swiss-based watch brand that, over the years, has managed to gain immense respect in the global watchmaking industry. Tissot, like Longines, has more than a century of watchmaking history. The brand was founded in 1854, just a few years after Longines was founded. Tissot started by producing gold pocket watches. After that, the brand decided to expand its market coverage outside its home country. In their first year of operation, the brand reached the United States watchmaking market, and within five years, the Tissot brand was a household name in the Russian watch market.

Tissot has been operating in their Chemin des Tourelles, Le Locle headquarters since 1907. The brand has maintained the location as their primary factory until today. In 1910, the Tissot brand unveiled wristwatches that were made exclusively for women. Soon after, the brand also released its wristwatch collections made for men. The wrist watches for men were sleek but slightly different than the ones made for women. The men’s wristwatches were bulkier.

Tissot started developing its in-house watch movements in 1917, and the brand also decided to produce high-quality timepieces that were affordable in the watchmaking industry. Tissot is famous for several innovations in the watchmaking industry. The Tissot non-magnetic wristwatch released in 1930 was the first non-magnetic watch.  In the same year, 1930, the Tissot brand partnered with Omega to form the Société Suisse pour l’Industrie Horlogère (SSIH), the first Swiss watchmaking association.

Tissot is among the top watch brands popular in the sports industry due to its rich watchmaking history and tested accuracy. They have become the official timekeepers of some of the top racing teams in the world.

Longines and Tissot are definitely in the same banner in the watchmaking industry but occupy different watch markets. The Longines brand is a luxurious watchmaking brand with a high price tag on its timepieces, unlike Tissot, a budget-friendly watch brand. If you a watch enthusiast looking for a budget-friendly watch, you will opt for the Tissot brand, but you will pick a Longines model if you want a luxurious timepiece. The two main types of watch models you will find common in the Longines vs Tissot debate are the dive watches and the sports watches.

Dive watches are designed for any underwater activity. These watches have particular features, which allow them to withstand pressure when they are submerged in water. Both Tissot and Longines have exceptional models, which fit in the category of dive watches.  The Longines Hydro Conquest L3.640.4.56.6 and Tissot Seastar 1000 Chronograph are considered the top dive watches from each brand.

When looking at the dive watches from the two brands, both functionality and price play an important role. The Longines Hydro Conquest L3.640.4.56.6 feels like a premium grade diver’s watch with its water-resistance of up to 300 m or 1,000 feet, 38 hours of backup power, and highly accurate timekeeping thanks to the Japanese quartz movement. The Hydro Conquest, though subtle in appearance, has high functionality, making it a reliable diving watch. The Tissot Seastar 1000 offers a much affordable option and has the same designs as the Longines Hydro Conquest. With its compass-like aesthetics, the Seastar 1000 has an upper edge when it comes to design. The watch also has the same water-resistance level as the Hydro Conquest of 300 m or 1,000 feet.

After looking at the two models, it’s evident that the Longines Hydro Conquest L3.640.4.56.6 is a premium high-grade diver’s watch despite the higher price. Even though the Tissot Seastar 1000 might be a more affordable option when looking for a dive watch, the watch’s lithium battery-powered movement seems to be the main downside of the watch.

These are watches that are more practical and less stylish. They are known to be more about precision and not about style. Longines and Tissot have several high-quality sports watches in their collection. We will compare the Longines Sports Legend L3.674.4.50.0 and the Tissot T-Race Swiss Automatic Chronograph.

The Longines Sports Legend L3.674.4.50.0 has a more traditional flair in design with a unisex appeal. The watch has a simple dial and a super compressor case design, hence the water-resistance of 300 m. The Sports Legend is seen as a marvel of watch engineering focusing more on the watch’s polished and exceptional functionality and less on appearance. The Tissot T-Race Swiss Automatic Chronograph comes in with a budget-friendly sport design and excellent functionality. The T-Race collection from Tissot is very popular due to its functionality and its racecar-like design. The watch model comes with chronograph functionalities and a magnifying glass on top of the date window display. The Tissot T-Race Swiss Automatic Chronograph is a wonderful blend of precision, style, and functionality.

The Tissot T-Race offers excellent quality and functionality, with a pocket-friendly price tag. The Longines Sports Legend L3.674.4.50.0, though with a minimalistic design, provides much more improved functionality, which is highly sought after when shopping for sports watches.

Tissot and Longines offer different incentives to watch connoisseurs, Tissot being the more well-rounded option between the two brands. Longines has the upper hand when it comes to brand recognition and producing high-quality, luxurious watches. The Longines brand has more to offer to watch enthusiasts compared to Tissot. Exquisite Timepieces offers a wide variety of Longines and Tissot watches depending on ones’ personal preference and taste. You will find a substantially expansive list of watches to choose from.