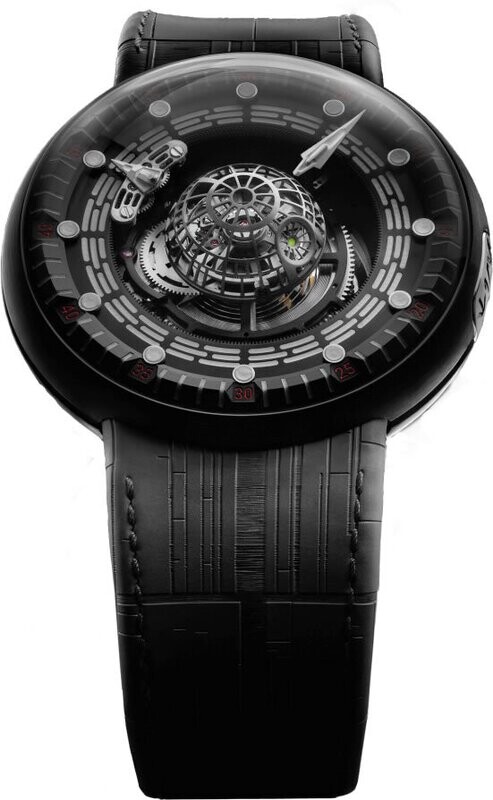 The 10-piece Death Star Ultimate Collector Set is made for those who savor Star Wars history as much as high-end design objects.

It is composed of a Death Star Tourbillon watch and an authentic kyber crystal movie prop from Rogue One: A Star Wars Story, delivered in an outstanding Imperial kyber crystal container.

The powerful and precious nature of the crystals required them to be stored in armored crates for transport. Faithful to the film storytelling, the container safeguards the precious elements inside: the Death Star Tourbillon watch, its set of straps and the kyber crystal are therefore secured in an official reproduction of those famous orange containers used by the Galactic Empire.

More than 700 parts were necessary to produce each container, scaled to half the original film dimensions of 3.94 feet long (1.20 meters). Fully hand-assembled and hand-painted, the containers embody the iconic saga story down to the smallest detail.

Every aspect of these substantial art objects, like fine sculptures, have been thoroughly conceptualized and executed with immersive details.


Like the powerful battle station itself, the masterpiece of 281 components highlights notable technical innovations, such as the hands which have been affixed to a peripheral display that orbits 360 degrees around the tourbillon.

The captivating tourbillon cage represents the northern hemisphere of the Death Star, making one revolution per minute. On the surface of the Death Star-inspired Tourbillon, a green superlaser cannon stands reminiscent of the space station’s kyber crystal enabled power.

Each realization of a Death Star-shaped tourbillon cage required 260'328 lines of code, which led to 483 operations on high-technology machines.