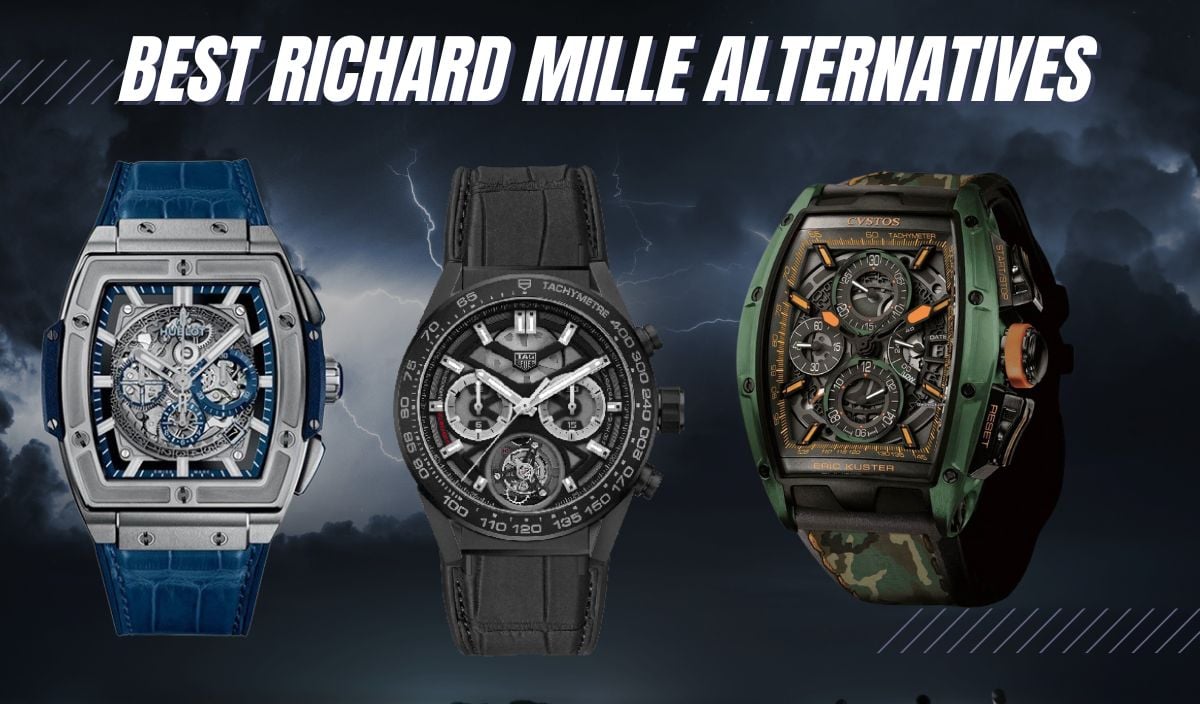 Richard Mille began his career during the 1970s with Finhor, a French watchmaking company. Subsequently after the company was bought by Matra in 1981, Mille rose to prominence until he oversaw the entire watchmaking operation. This specifically focused on brands like Cupillard Rieme and Yema.

Mille eventually left Matra’s watchmaking operations, which at that time it had been bought by Seiko, a decade later to make watches for Mauboussin. This jewelry firm was recently new to luxury watches. Seven years later, Mille collaborated with Audemars Piguet and began his own brand. He had nearly three decades of watchmaking experience by the time he began his own brand.

Within two years after, Mille released his first watch, the RM001 in 2001. This was a tourbillon watch that was specifically designed to bring watchmaking up to speed with the 21st century. The RM001 was a pioneer in the industry and instantly and created buzz around this new company.

Mille was daring enough to create a new segment in the industry, which it monopolozied and didn’t want to compete against others. The brand can didcate the price since there are no brands that sell similar designs, materials, construction, and execution.

Why is a Richard Mille Watch so expensive?

The brand produces an estimated 5,000 watches per year. Watches are crafted using materials that are rarely utilized e.g. silicon nitride, gold fused with carbon and quartz, and other materials that are usually only found in the aviation and racing industries.

Richard Mille’s mission is to push hand-made and high-end watchmaking to the very limits of technical innovation with exceptional engineering and quality movements. The size, shape, and design is instantly recognizable due to its unapologetically bold and automotive inspired design.

It’s analogous to buying a miniature sports car for the wrist. The revolutionary watches and cases have a featherweight feel and are extremely comfortable. Nicknamed the “Billionaire’s handshake”, it adorns the wrists of the most exclusive circles. It is the ultimate expression of wealth in horology.

Through it’s brilliant marketing campaigns and exclusitivity are main reasons why it has a high price. Due to its name and reputation and name, wearers pay a premium. The brand partners with ambassadors such as Flipe Massa, Pharrel Williams, Robert Mancini, Fernando Alonso.

Inside a Richard Mille Watch

Richard Mille watches are constructed with expensive materials such as gold, titanium, onyx, and sapphire. They also use several materials for their baseplates, such as carbon fused with gold and sapphire. Sapphire crystals are refined for 1,000 hours so each watch has a gorgeous case. Additionally PVD treated baseplates and coatings or Titaly, which is a type of innovation takes many years to accomplish.

Each piece is unique and some, such as the Tourbillion Panda RM 026-1 features diamonds. You don’t only pay for the materials, but the several months it takes to assemble them to make a watch. Richard Mille watches are well known for their movements and function as style! It uses hi-tech materials for the case, but the movement as well.

Movement parts are usually made of a special alloy that consists of 90% grade 5 titanium, 6% titanium, 6% aluminum, and 4% vanadium. Each watch has a maximum daily variation of 8 seconds. The brand crafts most of their movements in-house. There are manual winding as well as self-winding models.

PVD treated baseplates and coatings or Titalyt. This type of innovation takes many years to accomplish. The finishing techniques includes Anglage and hand-polishing, satin finishes on bridges, burnished pivots, wheels, and more.

Execution is to the highest degree, which leads to a sporty technical movement. Richard Mille was a pioneer for modern watchmakers. Watches are intuitive and designed for high impact reliability, unwavering accuracy, precision, and reliability with beauty and sophistication.

44mm x 34mm stainless steel case with sapphire crystal covers a hand-decorated 3-layer dial that is finished with hand-polishing and has PVD coating. It has luminous blue hands, indices, and skull outline, and a multi-colored stone-set bezel with 7 colors of precious stones and diamonds.

The exhibition case back displays the Swiss automatic Soprod M-1000 caliber that has a guilloche rotor and 42 hours of power reserve.

47.4mm 18k White Gold case with sapphire crystal that covers a cosmic dial that has luminous hands and indices and a tourbillion at 12 o’clock that represents Alexi Leonov floating in space outside his craft. A diamond revolves around the tourbillion that represents Leonov floating in space outside his spacecraft. Also, “Almaz-2” was Leonov’s code name during the mission and in Russia, “Almaz” means diamond.

The exhibition case back displays the Caliber LM48 the world’s first “satellite tourbillon” that beats at 21,600 vph and has 72 hours of power reserve.

43mm x 10.20mm case from a rose gold case with sapphire crystal and exhibition case back that has 8 screws and an alligator strap with pin buckle. It has an MR02 manual mechanical tourbillion caliber with a frequency of 21,600 vph and a power reserve of 108 hours. Has azure blue CVD finish, Geneva Stripes, Edges chamfering, and polishing.

47.5mm rose gold black PVD-coated titanium middle, steel bezel, and sapphire crystal that has an anti-reflective coating on both sides. On the grey dial there are golden hands and indices, contrasting blue screws, and 6 retrograde seconds hands-on gears with strip-spring return and date aperture at 6 o’clock.

An exhibition case back displays an exclusive mechanical automatic Dubois Depraz caliber that has 58 jewels. It has a decorated and engraved 22k gold rotor with a central bridge.

There is a 30-minute sub-dial chronograph at 3 o’clock, split-seconds function at 4 o’clock, twin central chronograph seconds hands, power reserve at 8 o’clock, and tourbillon cage between 10 and 11 o’clock. There also is a split-second (rattrapante), a self-winding mechanism, and a power reserve indicator is picked out in bright highlights of red and green.

Complications were re-engineered based on structural optimization and skeletonized to reveal as much of the movement as possible on the dial side. Its exhibition case back displays an automatic A-150 caliber that beats at 28,800 vph, has a power reserve of 45 hours,

A one-minute tourbillon, a fly-back double column wheel chronograph, a split-second (rattrapante), a self-winding mechanism, and a power reserve indicator. Complications were re-engineered based on structural optimization and skeletonized to reveal as much of the movement as possible on the dial side. Maximum legibility of the time chronograph functions.

48.20mm titanium case with sapphire crystal that protects a black dial. It has luminous hands, Arabic numerals for dial markers, and a single-pusher planetary-gear chronograph. The exhibition case back displays a mechanical manual CC20A caliber.

Completed with a black rubber strap and has a black coated titanium and satin and sandblasted finished buckle. Blue microfiber décor and stitching contrast.

42mm carbon-fiber case with black or blue occlusions. This barrel-shaped watch has carbon fiber with blue composites and an anti-reflective sapphire crystal that covers a gray sapphire dial…. And it has luminous dial hands and white indices. It has a bezel that is held by 6 H-shaped titanium screws while the case back is also in carbon and surrounds a sapphire crystal. The bezel is held by 6 H-shaped titanium screws.

An open-worked dial has contrasting white and black coloring similar to the case aesthetic. The hours and minutes are off-centered. The white inclusions are made from glass microfibers created as a non-woven fabric. The movement can be seen through the dial side of the exhibition case back.

HUB6020 movement reveals an hours and minutes dial-off-center at 3 o’clock, the tourbillon at 6 o’clock, and the 5-day power indicator at 8 o’clock.

Its exhibition case back displays the manual winding HUB6020 tourbillon movement, which was specifically designed for this model. It has 115 hours of power reserve.

For the first time, Hublot equipped it with a “One-Click” fastening system, which allows the strap to be changed easily and quickly. Black and blue structured lined rubber straps with black ceramic and black-plated titanium deployment buckle clasp.

Eminent design object with an immersive visual experience Faithful to the film storytelling, Kross Studio conceived an official reproduction of those containers, made of wood and aluminum. Inside the container is divided into nine storage units. Three interior sections secure three removable capsules,

45mm black DLC coated grade 5 titanium case has a dome-shaped sapphire crystal that protects the intricated hand-finished decoration such as drawing, polishing, and satin-finishing. On the surface of the Tourbillion, there is a green super laser cannon stands reminiscent of the space station’s kyber crystal-enabled power. The Tourbillion cage required 260’328 lines of code and makes one revolution per minute.

The traditional crown system was replaced by an inset push-button system. It features an engraving in Aurebesh script, which is one of the most widely used alphabets in the Star Wars Galaxy. The exhibition case back is made of grade titanium and has 4 anti-reflective sapphire crystals which display the KS 7’000 manual-winding central tourbillon which beats at 21’600 vph and has 5 days power reserve. To set and wind the movement, Kross Studio developed a D-ring-shaped crown, which is also on the case back.

It is equipped with an interchangeable strap system that hides the two quick-release buttons found on the underside of the case. A wearer can quickly change straps with a simple click.

There are three straps included:

Kyber crystal container. It safeguards precious elements, the Death Star Tourbillon watch, a set of straps, and the kyber crystal.

A functional art piece – more than 700 parts were necessary to produce each container. Scaled to half the original film dimensions of 3.94 feet long. Fully hand-assembled and hand-painted.

Kyber Crystal – official screen-used kyber crystal is part of the set. This is the power source of the Death Star’s super laser. This is the first time that authentic kyber crystal props will be released to the public and for die-hard fans to own a piece of the fascinating Star Wars Galaxy.